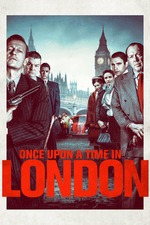 A epic film about the London underworld, seen through the eyes of Jack 'Spot' Comer and Billy Hill, kingpins of crime from the 1930s right through to the 1960s, is a great idea - but you really need to have a good budget to play with in order to do it justice.

Almost as soon as Once Upon a Time in London gets underway, you realise this is a film that doesn't have that kind of budget. A pre-title sequence shows Comer (Terry Stone, who also co-wrote and co-produced this) leading a passionate call-to-arms for the fight against Oswald Mosley on the eve of the British Union of Fascists march through London's east end that led to the Battle of Cable Street. Then we cut to the titles; archive footage of a procession of blackshirts carrying Union Jacks, mixed with the occasional flash of Stone throwing punches and splashing claret. You see the problem? The film builds up to events that it can't possibly fulfill the promise of.

Shot in as many of the secluded and untouched heritage corners of the very London that Comer and Hill dominated until the Krays came along, the poor finances behind the film means you never really get a sense of authenticity beyond the work of the costume department. One thing that particularly annoyed me was the fact that every boozer appears to be a smoke-free zone - hardly realistic! Of course another sign that this is a film made on a shoestring lies in the fact that the cast assembled are hardly top tier. Mind you, there are plenty of familiar faces here - after all, they all stare out at you from the endless cycle of Essex Boys/Kray Twins DVDs going for a fiver upon the shelves at your local supermarket. Bizarrely, alternative comedy legend Simon Munnery pops up as a crime reporter, which made me sit up for his few minutes of screentime.

The smart move here of course is hiring a director for whom a little thing like a lack of budget poses no issue. In Simon Rumley you would think the film has found just such a director, but the stylistic flourishes and the inventiveness over the budget that he showcased so well in Crowhurst is AWOL here, though that film's star, Justin Salinger, is present and correct as Comer's arch rival, Harry White, and is arguably the best actor here. I like Rumley, I'm an admirer of his London trilogy from the late '90s and early '00s, but this has to be his weakest offering yet and, being the follow-up to the memorable Crowhurst, it's a crushing disappointment. Add to this the fact that the screenplay is very lacking, characterisation is poor and one dimensional, the performances are seldom impressive, and the whole 110 minute trudge seems to just be cliched dialogue/fight scene/cliched dialogue/fight scene, rinse and repeat and just occasionally enliven with sequences of Stone getting his end away (vom), makes Once Upon a Time in London a film to leave firmly behind you.

The Filth and the Fury