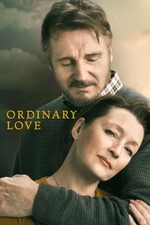 Ordinarily in any Liam Neeson film in which his loved one's life is threatened by an unseen, anonymous evil, the big man gets on the phone to tell them the mistake they have made by outlining the very special skills he possesses, before concluding that he's coming to get them. But you can't do that with cancer, and so Ordinary Love is a very different Liam Neeson film.

It's good to be reminded that Neeson can play... well, ordinary. That he is much more than just an increasingly late-age action hero. In Lisa Barros D’Sa and Glenn Leyburn's movie, he gets the opportunity to show a more natural and tender side in a wonderfully affecting screen partnership with Lesley Manville. The pair's chemistry subtly sparkles in the roles of retired married couple Tom and Joan who live on the outskirts of Belfast. The film opens at the tail end of this quiet 60-something pair's typically quiet Christmas and takes us across a period of twelve months that neither could have predicted from the outset. When their domestic harmony is rocked by the discovery of a lump in Joan's left breast, the agony and helplessness that grips this loving couple as they navigate the diagnoses and treatments is depicted with painful, tragic and sympathetic authenticity.

One thing I personally noticed and kept returning to was how isolated they were. Where were their friends in their hour of need? It's when you realise that this unassuming, ordinary couple lost their daughter that you perhaps realise that another hour of need had come and gone in the past, taking friends who were too scared to face the grief and bereavement along with it. I may of course be reading too much into it - the pair may just naturally be loners or the writer, Owen McCafferty, may have simply wanted to focus the narrative's attention on what the cancer bombshell does to a marriage - but I do suspect that this alienation is part of what the film is trying to say, as evinced by its closing scenes in which Tom suggests to Joan that they invite a young man called Stephen (Amit Shah) they had met on the Chemo ward around for Christmas, now that his partner Peter (David Wilmot) has died. Surprisingly it is Joan who is fleetingly less keen on the idea. Having been with Peter, sharing their private battles together, until the end, she may feel as uncomfortable with the bereaved Stephen as their estranged friends may have once felt when confronted with her own grief for her child.

At times, the film's close inspection of its central characters, the obvious affection both they have for one another and the filmmakers have for them, and the little things they do such as participating in the gentle niggling banter that has been honed from decades of living together or the daily walk that is diligently recorded on their fitbits, reminded me a little of Manville's other works, such as her Mike Leigh films or her excellent sitcom Mum. There are inevitably some moments that place this firmly in the traditional weepie category but, on the whole, this is a quietly powerful film about the resilience of a man and wife with a long, shared history. The title may suggest an ordinariness, but their love, and their strength of character, is far, far from that.