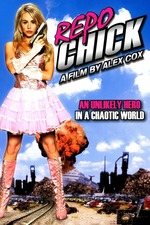 I'm a fan of the early films of Alex Cox, which include of course his breakout movie Repo Man. This 2009 film, may or may not be an official sequel to that earlier impressive production (legal wrangles y'know) was shot in around ten days for an extremely low budget onto green screen. If nothing else it proves Cox is still an inventive and experimental film maker.

He's also a unique film maker and this is on display here too, as Repo Chick certainly looks like no other film. Ramping the artificial nature of the green screen and the implicit budgetary constraints, Cox doesn't for one moment attempt to make this look like the real world and even uses toy cars to create a very weird, offbeat visual universe of an alternate post credit crunch, post cold war, cartoonish America.

Unfortunately, the script is dismal which means the inventive peculiarity on offer visually is scuppered by the ordeal of the dialogue and the plot. The larger than life characters, centring around Pixie, a disinherited Paris Hilton style socialite, are nothing other than extremely irritating. Obviously it's somewhat intentional as a satirical piece, but it does mean that the film struggles to gain audience investment and becomes a bit of a chore relatively quickly.

A Cry from the Streets