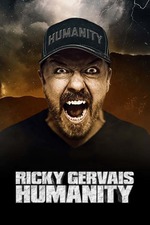 After watching Special Correspondents earlier it was good to see Ricky really on form in something again.

Humanity is Ricky Gervais' first proper recorded stand up show in a number of years, the last being Science in 2010. I found Science to be rather disappointing so it's a relief to report that Humanity really is Gervais firing on all cylinders. Not as great as Fame (2007) obviously, as I believe that's still his pinnacle in terms of stand up, but this material is certainly on a par with Animals (2003) and Politics (2004) and goes one better than those early shows by virtue of it being performed by a comedian who is now experienced enough and comfortable with performing as a stand up.

Like Gervais I totally agree that social media (something I do not personally use) is both a blessing and a curse on this world and that, when it comes to the latter, its very existence seems to have allowed the lunatics to take over the asylum. He makes his case that the world is growing increasingly dumber by citing numerous incidences of offence he has caused others on twitter. He's right to criticise and it is true to say that the onus is on the individual to ignore what they do not care for rather than go out of their way to push their opinion on others to get it censored or banned, but you could argue that in making the claim that twitter is the root of all evil you should then go on to highlight how such a trend is impacting on the rest of the (failing) world in greater detail than he does here - especially if one of the other points you're trying to make is that you are not 'out of touch' with the world because of your fame. That said, this is a stand up show not a sociological critique, and stand ups are meant to be funny. By that virtue alone, Humanity scores. The fact that it also makes you think about how we interact is an added bonus.

It was nice too to hear the stories about his family again in the encore, specifically his brother Bob. These stories may be familiar to anyone who has witnessed Gervais talk personally on a chat show, but they still bear repeating and prove conclusively (and much more than anything else in the set, I might add) that success hasn't really changed him all that much - he's still the boy from Reading he always was.