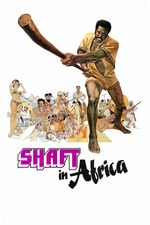 In 1973's Shaft in Africa, New York's baddest Brother Man does indeed go to the Motherland, but he also goes to France too - proving that he's quite the Harlem globetrotter in this third and final instalment in the original trilogy of films.

In fact, this is the closest the Shaft series got to resembling a James Bond movie, which is pretty ironic given that the Bond film that year - Roger Moore's debut, Live and Let Die - was getting in on the blaxploitation act. Contemporary reviews of late seem to want to dismiss Shaft in Africa's Bondian tropes as an example of the franchise jumping the shark, but in actuality, Shaft with his handsome good looks, his potent masculinity, sharp clothing and memorable theme tune had already long been held up as the blaxploitation answer to Bond, so this was always going to be a natural progression.

Where Shaft in Africa differs from Bond of course is in its boldness. The Bond films always implied the sexual via a series of increasingly cheesy double entendres and groanworthy puns. In Shaft in Africa we not only have explicit talk of FGM and of Shaft being circumcised, but we also have Neda Arneric's femme fatale Jazar wonder aloud about the size of Shaft's erm shaft by inspecting the dimensions of his nose and his thumbs, as well as getting off on the sight of black slaves, stripped to the waist, toiling in the blazing sun. Before all this suave villain Frank Finlay's request for her to ''brighten my day'' sees her engage in a spot of (only just) off-camera Taylforthing* whilst travelling in his chauffeur-driven motor. There's no nudge-nudge-wink-wink here as virtually nothing is left to the imagination.

Shaft in Africa sees the director and writer of the previous two films, Gordon Parks and Shaft creator Ernest Tidyman, replaced by Stirling 'In The Heat of The Night' Silliphant (who had previously served as executive producer on the Shaft films) on writing duties and John Guillermin as director. In shifting the action from Harlem to Ethiopia and France, Shaft is perilously out of his depth at times and Richard Roundtree seems to relish the chance to play a different, more vulnerable and culturally-awakened side to a character he is perhaps at his most comfortable portraying now that he has two films under his belt. It's a quality looking production with some excellent location filming and a diverse cast of characters but, as with the previous Shaft films, there are moments of longueurs which, given that this one has a longer running time than its predecessors, you can't help but feel tested by. The premise of the film is obviously an ugly one and it tackles it in an uncompromising manner despite the somewhat far-fetched nature of Shaft being hired to go undercover as a slave in the first place. It's a violent film too with one particularly distressing scene of animal cruelty (a dog that Shaft befriends is killed off camera, but we are subsequently shown a very real dog carcass, bleeding and being flung about - can't be sure if they actually killed the dog, but they definitely use a dead dog in shot) that means I cannot rate it higher than the three stars I am giving. I'm sorry Shaft but I can't dig that.

That's a bit of a bummer to end my review on so I'll quickly add that opening the film with 'Are You Man Enough' The Four Tops is a slice of fried gold that certainly puts you in the mood for what's to come.

*As is often the case with my references, you probably have to be British and have been around in the 1990s to fully appreciate them.