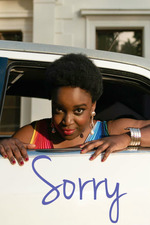 Cringing at the BBC continuity announcer who, in the introduction, referred to Lolly Adefope as 'hilarious' but then mispronounced her name as 'Lolly Ada-fop'. Oops!

Anyway I really like Lolly Adefope. I think she's very talented, funny and quite cute. I also think she gave a good performance here and I can also really see the satirical merit in what, as a writer, she was trying to do with this short film. Unfortunately it didn't all gel together that well. Not all the gags landed and it just had a bit of a shrill vibe to it, like it started quite loud and high so that, by the time it was required to reach breaking point, it didn't really have anywhere else to go. I think that was more a directorial issue than a script one, but it's equally fair to say that some of the gags didn't really fly either.