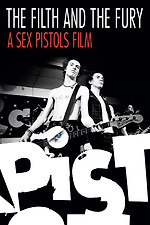 The Filth and the Fury

Twenty-one-years after he made The Great Rock 'n' Roll Swindle, Julien Temple returns to The Sex Pistols and effectively atones for that previous film's sin of accepting the lie that Malcolm McLaren was a genius - a lie which originated of course from McLaren himself.

It's a superior telling of the story of Britain's most infamous band, with Temple's art of collage and tongue-in-cheek contextualising having been honed to its sharpest degree in the intervening years. However, there is a tendency here to deny a previous god in favour of a new one, and step forward Johnny Rotten who is naturally all too happy to paint himself with the same flattering brushstrokes that he feels McLaren was guilty of. It's a frustrating move that places his fellow surviving bandmates,Steve Jones, Paul Cook and oh go on then, Glen Matlock (quite literally) in the shadows. Like every frontman in a band, Rotten has always loved the sound of his own voice. Still, at least we do get a glimpse of the real him, away from the sloganeering and the self-aggrandising, when he breaks down in tears discussing the death of friend and bandmate, Sid Vicious.

Blink and you'll miss the voluptuous, uncompromising figure whom Derek Jarman accurately claimed was 'the original Sex Pistol'; Jordan. There she is pouring herself into rubberwear in footage that originated from John Samson's 1977 documentary Dressing for Pleasure. Like many a woman in history, she is still robbed of the credit she clearly deserves. McLaren, Vivienne Westwood, The Sex Pistols, punk itself...they'd all be nothing without her.