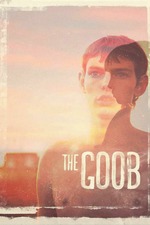 It always surprises me that there are so many regions and areas of the UK that remain overlooked when it comes to TV and film. All too often we see the same settings; London, Manchester, a homogenized Yorkshire, Cardiff, Glasgow. So it's genuinely refreshing to see Guy Myhill has not only chosen to feature Norfolk and the flat fenlands as his setting for The Goob, but that he has produced something truly cinematically unique and special with this oft-ignored region that it at once both so English and so alien. His cinematographer Simon Tindall captures the scenery in a beguiling dream-like manner, using the vast skies that dominate the level landscape in a suitably claustrophobic manner.

The Goob is an arty socially realistic drama very much about the prisons we submit ourselves too. It's a theme that is signposted from the film's opening line of dialogue, which sees the school coach driver wish the titular teenager Goob luck in life, providing he can leave 'this shithole'. Through Goob's eyes we can see the damage done to the souls of those who failed to take heed of such advice, most notably the old-before-her-years cafe worker Mary (a surprisingly downbeat turn from former S Club popster Hannah Spearitt) and his own needy, tearful mother played by Sienna Guillory, stuck in a relationship with belligerent stock car racer, pumpkin farm owner and chief gaolor in Goob's life, Gene Womack, played by Sean Harris with his usual, effective unsettling air.

Goob has several opportunities to do as advised - from a girl he meets at the local stock car meet, to Oliver Kennedy's defiantly flamboyantly camp co-worker and lastly the exotic and chic Eva (Marama Corlett) a transient worker on the pumpkin farm - but will the oddly detached youth take the chance?

Newcomer Liam Walpole is very arresting as Goob. Open faced, angular and with ears like big thick pork chops, he is the observer of his own life, an awkward blank page that is indicative of the uncertain future that lies ahead of him now he has left school. Underneath his absent gangly manner and gawky skin there's a dumb insolence and intelligence occasionally on display which suggests he knows full well that he should leave the domestic dictatorship of Womack's making, but there's clearly something there holding him back and it's perhaps not until we realise how needy his mother played by Sienna Guillory is that we understand the unspoken duty he feels he has to remain.

In keeping with a coming of age story which features a boy whose future is anyone's guess, The Goob's narrative is rather fragmentary and non-linear with scenes drifting hazily through like the long summery days the film takes place in. Sometimes this can hamper a film, but The Goob holds your attention throughout. This impressive full length debut from Myhill is certainly distinctive and recommended.