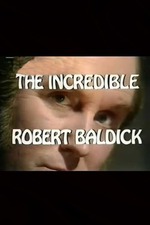 For Doctor Who fans such as myself, The Incredible Robert Baldick often crops up. Written by Terry Nation, the creator of the Doctor's deadliest foe, the Daleks, this 50 minute slice of Gothic Victoriana was, it has often been suggested, pitched to do the very thing the pepperpots from Skaro had longed to do - kill off Doctor Who. I don't really know how true this claim is to be honest, but it is, like I say, one that repeatedly crops up so often that the suggestion that this was to be a replacement for the Saturday teatime adventures of the Time Lord has become received wisdom.

I can't really see it myself. For a start, the dates don't really match the received wisdom. I may be wrong, but I was led to presume that Baldick was slated as a replacement when it looked like Patrick Troughton's departure from Doctor Who could have spelt the end of the show. But that was in 1969/1970, and the pilot for The Incredible Robert Baldick didn't see the light of day until 1972, well into the tenure of Troughton's predecessor, Jon Pertwee. I believe that transmission was delayed on account of a real Robert Baldick taking umbrage with Nation for using the name, but I can't ascertain whether that delay was two years. Furthermore, the Drama Playhouse strand that this was broadcast under doesn't really scream Saturday teatime, and nor does the plot or tone of Baldick too - though it has to be said that Doctor Who producer Philip Hinchcliffe and script editor Robert Holmes would push the envelope of what was acceptable at such an hour just two years later with dark Gothic stories that certainly trump what Nation was doing here.

So who is The Incredible Robert Baldick? Well it seems he's some kind of inventor, one who has been knighted for his triumphs in the field, but who prefers the title he has earned rather than rewarded, that of Doctor (sounds familiar?). We meet him when he is seemingly in the process of inventing the telephone to speak, from the comforts of his palatial home, to the local station master, who happens to keep watch over Baldick's second home; a lavish, bullet proof, private locomotive that was built in Britain for Tsar Nicholas II, but which - because of some wrangling - never reached its final destination. Being a charitable fellow as much as an obvious eccentric, Baldick purchased the train, thereby saving the locomotive builders their jobs and named it the Tsar in honour of its origins. So it appears that Baldick is a scholar and a very rich one at that, but when the body of a young woman is found murdered in the crypt of a church, the vicar (James Cossins) calls on Baldick to investigate. Why he would be the first port of call is unclear, but what is clear is that Nation is emulating Sherlock Holmes as much as Doctor Who. Determined to help, Baldick and his loyal friends and servants (Julian Holloway and future Islamophobe and misogynist John Rhys Davies, looking rather like the lead singer out of Mungo Jerry) board the Tsar and set off to investigate.

What follows ticks all the boxes for Gothic Victoriana; an exploration of atheism (as represented by the man of science, Baldick) over Christianity (Cossins attempts an exorcism of the site, only to have his faith shaken), a snobbish depiction of the working class as yokels who are either victims or superstitious aggressors - and in the case of the women it's exclusively the former, and an eerie mash up of the Jamesian tragedy of curiosity and a Knealesque evil since the dawn of time. Despite these familiar tropes and its pedigree of influences, The Incredible Robert Baldick doesn't really seem to know who its audience is, or maybe, because of its place in the history of Doctor Who, it comes with the baggage of viewing it as a competitor. Either way, a series was not forthcoming as Drama Playhouse opted for the more grounded Sutherland's Law, starring Gareth Thomas, the future star of Nation's Blake's 7.

I'm surprised Mark Gatiss hasn't tried to resurrect this for television to be honest, or Big Finish for their audios.