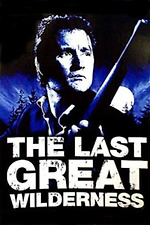 When The Last Great Wilderness was released in 2002, there was quite a buzz around David Mackenzie's feature length debut, an offbeat indie that many agreed had all the makings of a cult classic. Whilst the film helped to project Mackenzie into the film world and his career has gone from strength to strength, it's fair to say that the promise of cultdom initially afforded this film hasn't delivered fruit, arguably because somewhere along the line we've let it sleep on us - an issue not helped by relatively little screenings on television. That's kind of weird, because there's never been more of a climate - in British indie circles at least - for this movie than there is right now. In many ways, The Last Great Wilderness does everything that Ben Wheatley does, long before Ben Wheatley was a thing. Its eerie and unsettling, somewhat quasi-cult elements draw comparisons with Kill List, it's oddball road movie trappings brings to mind Sightseers and, in its scenes of things coming to a head during a party in a remote old house, it also feels familiar to Wheatley's most recent, Happy New Year, Colin Burstead. It's time this was dusted down again and given the recognition and appreciation it deserves, because they were right all along; it is a cult classic of early '00s British indie cinema.