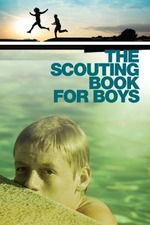 It irks me that this fine film remains an unfairly overlooked example of British independent filmmaking. Written by Skins and This Is England '86, '88 and '90 co-writer Jack Thorne and directed by This Is England '86 co-director Tom Harper, it also stars This Is England's Thomas Turgoose alongside Holliday Grainger (who I still remember as a six year old in Preston Front) as two teenagers in - to quote the tagline - 'a sort of love story'

Turgoose is David, a lonely boy who lives on a Norfolk caravan park where his father is the resident entertainer, singing Country and Western tunes to the holidaymakers. Also living on the site is Emily (Grainger) the daughter of Susan Lynch's single parent Sharon, who runs the camp's shop. Having grown up together in a place where other children of their own age are transient, David and Emily are inseparable, like brother and sister. Life for them is one long endless summer in a perpetual children's playground. They steal sweets, fix the arcade games so they can play them for free, and bound along caravan rooftops all to a score from Noah and the Whale. But childhood's end is on the hazy horizon; already Emily is in that curious state of brattish, naive adolescence and burgeoning womanhood, attracting the attentions of camp security guy Steve (Rafe Spall), leaving David behind in the maturity stakes. So when she hears that she's got to leave the area to live with her father, she feels desperate to cling on to a childhood and a past they both perhaps already knows is slipping away. Together, she and David hatch a plan to keep her there, but first she has to run away...

The utterly authentic, sympathetic and natural performances from both Turgoose (just sixteen) and Grainger (then twenty, but utterly convincing as a girl of perhaps six years younger in keeping with Emily and David's age) carry this coming of age story through from its idyllic opening to its dark and tragic conclusion, as she becomes aware of her sexuality and maturity and he in turn is driven to distraction by this change in her. Many critics argues that the film's later stages see the plot begin to unravel, but I personally found it quite reminiscent of Jerzy Skolimowski's Deep End - one of my all-time favourite films, so there's no complaints really from me. More valid a criticism perhaps is that the adult characters are too broad but perhaps they have to be in a film which focuses so wholeheartedly on our two teenage leads.

Robbie Ryan's cinematography is utterly beautiful, capturing the halycon, rose-tinted look and feel of the British holidays in our collective youth, lending the film a sun-kissed magic that is fitting for David and Emily's golden days, whilst at the same time knowing that the sun is setting around them. This is less a rites of passage and more a heartbreaking story of two kids drifting apart and unable to stop time's tide.