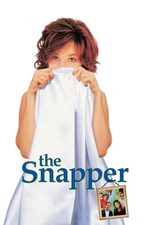 With his role as Georgie Burgess here and of Pat Mustard in Father Ted, the late Pat Laffan was surely the most sexually potent man in Ireland! I mean, Casanova who?

This instalment in Roddy Doyle's Barrytown trilogy was originally broadcast on BBC television in 1993 as part of the Screen Two strand, before getting picked up for a cinema release on the international stage. It's perhaps because of these humble origins and its obvious air of a tele production that The Snapper has perhaps been overshadowed by the other films in the series - 1991's The Commitments and The Van from 1996; indeed, it's precisely because of the film rights of the former that the family here had to be renamed from Rabbitte to Curley - and I was initially at a loss to recall if I'd actually seen it or not, but that confusion was resolved when the memories came flooding back the moment Tina Kellegher's expecting Sharon looks up from her book on adverse symptoms of pregnancy on the bus and moans "Oh jaysus, me fanny!" .

The story is a simple one. Sharon, twenty-years-old and unattached, finds herself pregnant after a one night stand and takes it upon herself to keep the identity of baby's father a secret. As her family reel from both the news and her stance, neighbours and friends start to try and uncover the truth, and the finger begins to point to a surprising suspect (the aforementioned Pat Laffan). An embarrassed Sharon spins a lie about a romantic night of passion with a Spanish sailor ("Just like Letter to Brezhnev"), whilst her feckless father Dessie (Colm Meaney) steps up to the plate to act as an unlikely surrogate, heading off to the library to bone up on all things related to maternity and affecting the family in unpredictable and surprising ways.

Adapted by Doyle from his own novel and directed by Stephen Frears, The Snapper may not reach the heights of The Commitments, but the script is peppered with many a funny and quotable line and a genuine warmth too. Well played by the core cast, The Snapper is in turn both riotous and heartwarming, effectively showcasing the innate decency of ordinary working class people who, when confronted with a challenge, find the strength and compassion required to do what's right and make the best of things.

Bullet to the Heart