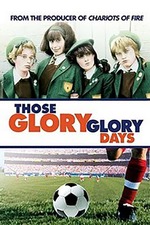 Written by Julie Welch, football journalist with The Observer, Those Glory Glory Days is a semi-autobiographical, charming and nostalgic tale of a thirteen-year-old and her fellow schoolgirls enthusiastic obsession with the 1961 double winners Tottenham Hotspurs and their captain, Danny Blanchflower. Directed by Philip Saville, the film was first broadcast by Channel 4 as part of their First Love series in 1983, before gaining a theatrical release alongside Jack Rosenthal's excellent P'tang Yang Kipperbang.

The key to Those Glory Glory Days is that banner title of the series it was taken from; First Love. Ostensibly, for much of the film's running time, you'd be forgiven for thinking that the first love in question was football and Spurs, but it eventually becomes clear that the real first love lies in the friendships that Welch so sweetly brings to life. In this endeavour she's helped enormously by some very talented young female actors, with the fourteen-year-old Zoë Nathenson proving a particularly adorable standout in the lead role of Julia, or 'Danny' as she wishes to be known as; in honour of course of Danny Blanchflower. Nathenson is really engaging in the role and possesses great comic chops that are only rivalled by Sara Sugarman's Artful Dodger-like turn as her best mate and gang leader Toni. Cathy Murphy and Liz Campion round out the quartet, though it's true to say they each have less character to play with beyond bickering between one another.

Apart from Nathenson's performance, the other thing that stands out about Those Glory Glory Days is that it is a film about football where the fans just happen to be young girls. Welch's screenplay flags up what was then the unfortunate novelty of being a woman who enjoys, understands and is supremely knowledgeable about football, in the film's opening scene set in the present day of the early '80s which, one suspects, comes straight from her own experiences; crowded in the the press box at White Hart Lane, the grown-up Julia is beset by a gaggle of male journalists (including Richard Wilson and, way before Lovejoy, Dudley Sutton and Chris Jury) who insist on 'mansplaining' the game to her, mistaking her for someone's girlfriend rather than one of them. Upon leaving the ground, a harassed Julia is offered a much-needed lift from none other than her childhood hero, Danny Blanchflower; a moment which allows her to reminisce about 'Those Glory Glory Days' when she and her three friends were determined to get tickets to the cup final to see their heroes lift the trophy in triumph. This then allows her screenplay to concern itself (much like Nick Hornby's Fever Pitch did for Spurs rivals, Arsenal) with just what football can mean to people, and how, underneath the team colours and all the noise, it is really about simply wanting to belong to something.

There's also a lovely little role for that legendary battleaxe-character actress Elizabeth Spriggs as the girls' school mistress; a teacher who, when issuing a detention, bangs a gavel and proceeds to place a piece of black cloth upon her head as if passing the death sentence!