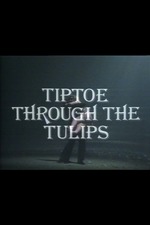 Set during a middle class dinner party where one bearded and bespectacled guest earnestly announces how impressed he is with state education, Tiptoe Through the Tulips follows a lot of typical Play for Today concerns, but it is unmistakably the work of its author, Beryl Bainbridge. The setting predates her novel Injury Time about a disastrous dinner party and, like much of her work, is courageously autobiographical.

Rosemary Leach, who had previously starred as David Essex's mother in That'll Be the Day for the play's director Claude Whatham, stars as Rita - Bainbridge in all but name. A divorcee prone to drinking too much, Rita is both vivacious and vulnerable; a complex and unconventional middle-aged woman who has been invited next door by her more 'proper' neighbours for an evening's dinner party. The hostess has a mind to match Rita with Piers (Michael Gambon), who has a reputation for being 'fruity'. However, it soon becomes clear that Piers' reputation is not wholly accurate; a product of public school, he has an innate charm that some women mistake for flirtatious behaviour, but in reality is somewhat hopeless and wholly ordinary and averse to risk. Nevertheless, the pair make a connection under their own steam, despite a string of familial interruptions and near farcical catastrophes blighting their evening.

This kind of thing, a tale of an odd couple stumbling towards romance, could very easily fall into sitcom territory, but Bainbridge's hand remains firmly on the tiller, plotting a course through more bittersweet, tragicomic waters. Leach's performance is especially good, capturing the anxieties that lie never far from the surface of Rita's seemingly carefree demeanour. Her tall tales concerning friends who dodge rail fares and engage in kinky parties involving gas masks are the sign of both a fertile imagination and a desire for adventure that her life as a single parent to a precocious infant daughter and difficult teenage son - to say nothing of her airs and graces mother from Southport (the marvellous Joan Hickson) who has taken her bedroom, forcing her to sleep in the living room - has not fulfilled.

Whatham's direction is solid, employing fluid camera pans across the dinner party set whenever a guest has something to say, suggestive of the audience turning its collective head to pay attention and thereby placing them in the midst of the party. Great sets too - everything interior was shot on VT in the studio with only some exterior film shots at the start and close of the piece.