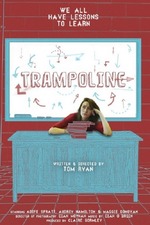 A common failing to be found with ultra-low budget independent films is a type of 'hollowness' that permeates the production. It's there in the poor sound design, in the performances of its cast who often seem to be reading the lines aloud rather than emoting them, and in the direction which never captures much authenticity. You find yourself watching the film play out, knowing full well that the interior on the screen is the director's mate's house, on loan as a favour. In short, all this adds up to you not believing the story for one moment.

Thankfully 2013 Irish indie Trampoline has none of these failings. Writer/director Tom Ryan delivers a remarkably professional film (though admittedly not especially cinematic looking) on the shoestring budget of €1000 and captures some truly good performances from its cast, specifically Aoife Spratt in the central role of Angie, but also the likes of Niamh Algar, who so recently impressed in Shane Meadows' miniseries The Virtues, in support.

A story of a young woman struggling to come to terms with her identity and what she feels she ought to be doing with her life, Trampoline fits nicely alongside similarly themed female-centred identity crisis films like Daphne and Adult Life Skills. A remarkable achievement from Ryan, and I'd like to see more of the engaging Spratt.