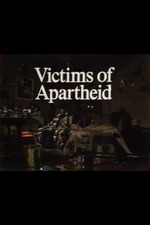 "When you've got racialism, who needs a colour bar?"

Victims of Apartheid is a 1978 Play for Today directed by Stuart Burge and written by Tony Clarke. On the surface, much of the action is played for laughs, but the themes it tackles are dark and polemical, so what we are really dealing with here is a tragicomedy.

Delivering a superbly tragicomic central performance as George, a former ANC activist now exiled in London, is the great John Kani. A garrulous know all of a man eager to get his many points across, George finds himself saddled with Henry (John Matshikiza) who has newly arrived from South Africa. But, the more we hear George speak, the more we realise it is he who is the real innocent abroad; adrift in a strange society he is unable to see is beset by its own kind of racism and possesses an almost childlike optimism and good faith in Britain, as evinced in him seated on his sofa on the pavement, his worldly goods surrounding him. He's been evicted, though he is certain he shall be rehoused in a much better residence any second now. George is also deeply traumatised by the torture he endured back home, something he refuses to adequately confront. The play's devastating final moments bring George's experiences full circle with a bitter irony.