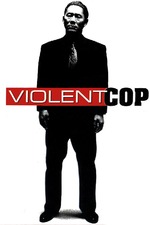 I've been somewhat lowkey fascinated with Takeshi Kitano for several years now for two reasons; the first being his performance in one of my favourite films, Merry Christmas Mr Lawrence, and the second being of course Takeshi's Castle, back in the days when Craig Charles would narrate it for western audiences. I say low key because, despite all this, I've never actually sought out any of Takeshi Kitano's acclaimed directorial efforts. But BFI currently have them on so I thought it was about time I did, and where better to start than his debut, 1989's appropriately titled Violent Cop.

You don't need to be Sherlock Holmes to realise we're dealing with an officer who is perhaps best termed a maverick here. The maverick cop genre is a tried and trusted one played out on every continent on the big screen and the small, but the best of them know that the appeal lies in the fact that these heroes (and sometimes antiheroes) are men out of time. From Clint Eastwood, whose Dirty Harry recalled the kind of lawless frontierism its star was best known for portraying in the western genre that made his name, to British TV's Gene Hunt of Life On Mars and Ashes to Ashes fame and which, by virtue of its time travel concept, ably explored the appeal of the unreconstructed chauvinist, macho male upon the otherwise progressive, liberated intelligent women in the audience who found him and his antics attractive.

As Inspector Azuma, Takeshi Kitano has created a similar man out of time, one which explores and celebrates the Japanese male identity pre-WWII. Defiantly, doggedly macho, to be a man in Japanese culture at that time was to be a blunt instrument and Takeshi Kitano brings that to the fore here in his role as Azuma, defying critics and audiences who had previously only known him as a comedian. There's an unpredictability here, arguably playing on these perceptions, that serve Kitano as a performer well. His deadpan expression, that way he has of never quite meeting anyone's eye with a jaw somewhat slack enough to break into a laugh or an anguished roar, keeps viewers on their toes, but the canny within the audience know that this is a man working against the clock. He simply no longer fits in modern Japanese society and, when he cannot physically dominate a situation, the expression suggests someone who is ill at ease at every turn. Jaded and on borrowed time, this then pre-empt the nihilism that Violent Cop ultimately, shockingly gives itself too, but not before Kitano, as a director, continues to deft audience expectations. Anyone approaching a violent drama about a maverick cop in the late 80s would arguably expect a frenetic, action packed affair, one with perhaps a Simpson and Bruckheimer sheen, but if Kitano was looking to US cinema for inspiration it was to the more laidback approach of 70s New Hollywood, adopting a melancholic keyboard heavy jazz score for the brutal murder of a cop and its subsequent car and foot chase setpiece.