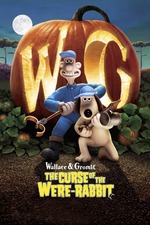 Wallace & Gromit: The Curse of the Were-Rabbit

When this first came out I enjoyed it, but not as much as the three previous short films featuring Wallace & Gromit. I wondered if my disappointment stemmed from the fact that the characters had perhaps been stretched by the feature film format, or if I had simply outgrown the children's stories of a cheese-loving Wiganer and his loyal yet long-suffering dog. After all, the first three films coincided with my childhood and teenage years (from 10 to 16 in fact) whereas this came out when I was 26. But a couple of years ago I saw Shaun the Sheep and the sheer infectious joy I felt from that told me that my theory that I had outgrown the world of Aardman was false. So I guess I just feel that the feature length format is the wrong one... revisiting this today confirms that.

That's not to say this isn't a hoot though. There are some proper big laughs to be had here, even if the story doesn't work as well as those in previous outings. Also it's lovely to see Nick Park's Ealingesque, 1950s-style Wigan properly opened up and explored, with the added bonus of a rich and varied vocal cast. Ralph Fiennes and Helena Bonham Carter obviously get star billing but, for me, the cherry on the cake here is the utterly right casting decisions of Liz Smith, Nicholas Smith, John Thomson, Peter Kay, Dicken Ashworth and Edward Kelsey.

And I love the fact that in Park's fictional Wigan they don't read Hello, they read Ay Up!