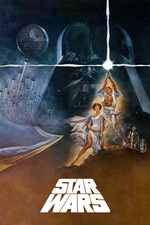 On DVD with Des, Lily, Izzy, and Baby Abe

I’m living the dream.  I let the kids choose a film for our family movie time, and they chose “Star Wars.”  They wanted Mommy to join us for the viewing so that she can see the one where the Star Wars heroes first meet.

-Early in the movie, C-3PO and R2-D2 discuss Princess Leia (about 3 minutes in, Threepio says, “There’ll be no escape for the princess this time.”), but when Luke sees her video message to Obi-Wan and asks who she is, C-3PO says that he isn’t sure who she is (this happens about 20 minutes into the film).  I didn’t get the feeling that C-3PO was lying to protect Leia, so I don’t know how to explain this other than a script error.  The best part about discovering this is that my 5-year-old is the one that picked up on this.  Later in the film (around one hour and 10 minutes), R2-D2 finds out that Leia is on the Death Star.  He says “She’s here,” and when Luke asks “who,” Threepio says “Princess Leia.”  “The Princess, she’s here?” Luke exclaims, and Han Solo asks for more details.  Luke explains that these two droids belong to Leia and that she’s the one in the message.  But how does Luke know all of this?  Earlier, Luke received no details about the woman in the video message, and now Luke somehow knows that she is a Princess and he believes that the droids belong to her (which I’m not sure is actually true).  This is the first time I realized how messed up the continuity is regarding this aspect of “Star Wars.”

-As the film opens R2-D2 and C-3PO are walking down the hall, joined by another droid that looks exactly like Threepio, but is silver instead of gold.  This silver droid quickly goes down a different passageway, without even saying a line, but I wonder how the films could have been different if the silver droid had stayed with his colleagues.  Would he have joined the heroes on their adventures?

-After seeing some damage on the droids, Luke asks C-3PO, “Have you been in many battles?”  Threepio replies, “Several, I think.”  I wonder why he said “I think.”  He is a droid, so he should have an accurate memory.  Is it possible that Threepio realizes that his memory was wiped after Episode III?  Has his memory been wiped multiple times? Does he know he has holes in his memory?

-Right after that conversation, Threepio says, “I’m not much more than an interpreter, and not very good at telling stories.  Well, not of anything of interest, anyway.”  This line stuck out to me because in “Return of the Jedi” C-3PO entertains the Ewoks by telling the story of their “Star Wars” adventures, using voices and sound effects along the way.  Based on that Ewok scene, I'd say that Threepio is actually pretty good at storytelling, but maybe he gets better at this skill because of everything that happened in the three movies.

-Leia’s first line to Han Solo, when she meets him in the middle of a shootout with the Storm Troopers, is a rude comment, and I’m thinking “Why is she being instantly mean to him?”  Then she sarcastically calls him “Flyboy,” but as far as I can tell, she should have had no way of knowing that he was their pilot.  This could be explained away by saying that Luke updated her off screen, but 10 minutes later, shortly after the trash compactor scene, Leia is mad at Solo again, and this time she mentions that she doesn’t even know who he is.  For some reason, these dialogue errors are really sticking out to me today.

-There are actually quite a few little mistakes, like when one of the Rebel leaders is talking about the Death Star plans that “Princess Leah” (instead of Leia) provided them with.  Getting her name wrong should bother me more, but for some reason I give a lot of grace to “Star Wars” in regards to everything that I’ve mentioned in this review.