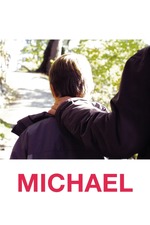 I couldn't help thinking of Force Majeure when Michael hits the ski slopes, not just because of the setting of that particular segment, but because of it's parked shooting style, framing the conventional routine of a character down to their personal foibles. More notably however, I realised this was simply not as good as Force Majeure as a spectacle.

Though in no way entertaining, and regrettably unsatisfying, I did enjoy the film's purpose. As other reviewers have said, evil is not always gory or transparent. When Michael becomes aroused on the child's bed, he is in no theatrical quandary, he instead looks accustomed to what should be an unthinkable act, and it is that that makes us shudder. When the child hits out in frustration, Michael's reaction is not to fight back but to grin and take pleasure from the child's futility. His indifference is what makes this character work, far more than a weapon in his hand ever could.

What I found lacking from the film was any intrigue in the plot, if indeed it had one.