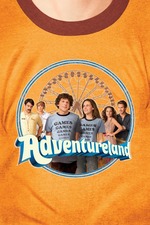 Nostalgia works because the past makes us what we are today. Thus, the past is the ultimate comfort zone, because it directly caters to who you are today.

Adventureland is a great film about nostalgia. It's like midnight is Paris great. It's a film that takes place in the 80s and operates with the surface level appeal of being "like" the 80s, but upon further inspection it's the perfect encapsulation of youth. It's the feeling of living that shitty carnival job, and romanticizing it. It's vibrant, alive, beautiful.
The screenplay is absolutely fantastic. Just look at how naturally they set up the moment when Jesse Rosenberg and Kristen Stewart meeting outside Ryan Reynold's house. Think about how much has to go into working that moment into the story, not to mention making the moment emotionally resonant.
There are so many moment a like that, where I'm not just wrenched through the story, but also wrenched because of admiration, and because of connection.
The direction here is important too. It's rarely anything other than coverage of people speaking, but ocassionally there's actual direction which is pretty cool. But direction is also the actors and tone, and the less tangible things directors do are all aces here.
And the movie is hilarious. Gimmick characters aren't really fleshed out, but they're still interestingly gimmicky. The characters are funny, the set ups are funny, the details and callbacks are funny. Everything is earned through naturally likable and flawed characters. Even the ending, which, after a bit of thought, turns from raucous sentimentality to the perfect and giddily "Porky's" grace note
And not a single joke diminishes the dramatic impact. There's even a moment near the end where a barely used side character makes a joke to Stewart's character, and it's amusing and enjoyable until, elegantly, it shifts to devastating.
Not every moment is like that. But not every moment needs to be.
It's a movie about something real. It's about youth. It's about not realizing how beautiful and alive your world is but still feeling it and experiencing it, perfectly oblivious but also completely active, both in control and reckless, consistently more aware and perpetually oblivious.

"Adventureland" is a lot more special than people give it credit for. Show it to any teenagers you know. Or anyone who loves the 80s. Or anyone.