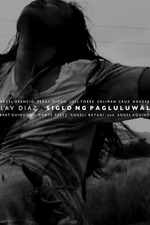 This was my first Diaz around 18 months ago and I did not exactly respond to it well, its elongated poetry recitations with long contemplative gaps did naught to jolly my rogers at that stage of my life, quickly shedding its soporific and laborious tendencies in favour of something that might be a little more inviting without the opportunity cost of losing six hours for merely seeking it out. 18 months onward Lav Diaz is still seldom an easy pill to take, he's sedative and hypnotic and numbing and arduous and formidable. But also extraordinarily rewarding if you can skip to the cadence of his unusual six legged frame. Having seen all available Diaz films now it's certainly an easier dance than it was 18 months ago, though it might never be easy, and that might just be part of its seductive charm. But there was one thing that never left the deep chasms of my memory that briefly unlock at intermittent A.M periods, that god damn frustratingly catchy song of death that the inhabitants of Century of Birthing perpetually sing. And not in a nice way. In an I came in like a wrecking ball kinda way. And so but still there's a multitude of things my uninitiated self hadn't seen those many months ago, a placid pacing of absolute peacefulness, the beguiling chiseling of the master constantly at work, the self-awareness and politial jugulars lunged at, the protraction which feeds the soul of the film, the What Time Is It There? poster proving its directors immaculate taste. "Maybe life is supposed to be like dreaming?" Diaz asks through his protagonist, well stick around kid and you might just learn a thing or two about dreaming, he goes on, but you're going to have to stop thinking so much and look real closely at those reflections.

A Spell to Ward Off the Darkness