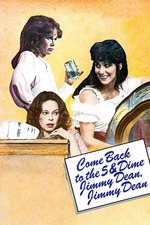 Once again, the king of conversational magic proves that sometimes the greatest stories can be found between the smaller cracks of a bigger picture.

Funnily enough, it was during rehearsals of Altman’s Broadway debut that he discovered Ed Graczyk’s play was full of cinematic gold, which ultimately inspired him to bring this film adaptation to life. Using the rundown interior of a Texan Woolworths, Altman transferred his marvellously designed set from the stage to the studio, along with several of the original cast members jumping on board for the project. The result was (and still is) a technically innovative and emotionally complex collision of manners and twisted memories, showcasing Altman’s signature talent behind the camera while indulging in his own cinematic devices to expand on the themes explored in Graczyk’s text. Needless to say, the entire ensemble give absolutely sensational performances, but it’s Cher and Sandy Dennis who truly reign supreme.

This is arguably one of Altman’s best films for a variety of reasons and easily falls into my top five from the director’s treasured body of work.