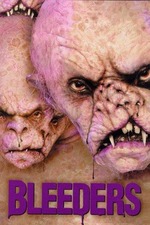 More than ten or fifteen years ago I heard about this film thanks to actor Roy Dupuis (someone here will know was him?) since La Femme Nikita is one of my favorite TV series and when I first read the synopsis the truth was a bit scary to me (but wow, I was a teenager in those years) and I don't know why I lost track of this film, I forgot about its existence completely, but thanks to a cousin I remembered again and decided to watch it last night.

Bleeders AKA Hemoglobin is the typical B horror movie with erotic touches that try to be justified, it is one of those kinds of flicks that abounded during the '80s and '90s, from the script, direction, actresses, characters and events. Here there is nothing of great scares or a story with great complexity and the truth is that it is easy to anticipate and know what will happen throughout the story which can be understood without breaking your head but in any case, has very noticeable gaps, actually some moments are put in the story without any reason or explanation, but we must be honest: to this type of film, you can not ask much.

The only characters that have a weight (if we could consider it) are Dupuis, although at times he tends to look a bit clumsy and Rutger Hauer as they give him a lot of time on camera necessary to ''stand out'' although if someone told you that he appears here you wouldn't believe it and wouldn't care anyway because he ends up going very unnoticed.

In itself, it is an average terror film that for whoever has seen it or not will become forgettable, but despite this, something that I must recognize above all is the fact that it addresses two issues not so common as inbreeding and incest, which are not regular to see them every day and I feel that in appearance Bleeders could have pushed so much further into something more superb and go beyond the usual or conventional, but if so it would have needed to make a story from scratch starting on zero.