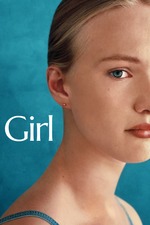 Two reasons have encouraged me to see this Belgian film: 1. The interesting subject it deals with 2. Because it features an actor who has always been so underrated and I am referring to Arieh Worthalter who, when I have seen him, I think that he has received little attention in the film industry.

The story of Girl is as simple as it is complicated to analyze: Lara is a 15-year-old transgender girl who dreams of becoming a dancer. Rather than exposing bullying or intolerance towards Lara, filmmaker Lukas Dhont addresses the inner confrontation and concerns of the young girl. Dhont immerses us inside the routines, discoveries, fears, worries, conquests, and defeats of the protagonist's day-to-day life. Almost always though small episodes enrich the plot and develop the character.

They are moments that not only contribute to getting to know the character and her longings, but also help to create such a strong bond between the viewer and the teenager that he or she will feel compelled to share her feelings, such as joy, pain, or sadness. In Girl, everything is shown with enormous restraint and treated with masterful subtlety throughout this deep, enveloping, and delicate drama.

This delicacy is particularly noticeable in the almost maternal relationship that the protagonist maintains with Milo, her younger brother, or in the relationship of enormous closeness and complicity with Mathias (Worthalter), her father. Worthalter manages to perfectly insert an affable, understanding, and tender posture to his character, a cab driver who supports his daughter in all her decisions as many people like Lara can not say the same, living under a roof with parents who have conservative thinking which is not bad, they just think so because they lived in times where the way of teaching values and inculcate children was very different to now.

Despite the support of her immediate environment (school, friends, doctors), the understanding of her open-minded father, and her brother, Lara repeatedly encounters gender boundaries in the locker room or intimacy with a teenage neighbor because as much as Lara feels imprisoned by her body, Girl's focus is not so much on the transgender issue, but on the universal problems that come with puberty. Its director highlights that physical discordance through soft imagery, thanks to exceptional cinematography in contrast to the cutting tones making a striking combination for this sensitive, intimate, affectionate, and warm but also brutal transgender portrait.

The handheld camera revolves around a sometimes smiling Lara, other times caught in the intersections of an agonized face during her sober ballet movements, in the bleeding of her feet due to hard workouts, or in the images of her male body reflected through the mirror. Lara's inner suffering is perfectly personified thanks to the great acting work of the young actor Victor Polster, who in real life is also a dancer of the Ballet Vlaanderen, completely internalizes and characterizes Lara's transgender role both physically and mentally. With a delicate, precise performance and the fragility of porcelain, he manages to enchant the viewer from the very beginning. The actor offers a contained performance in terms of composition, but rich in nuances and the small variations required by each scene.

Although it does not become a masterpiece, surprisingly, this work is Dhont's first feature film because it is made with confidence, maturity, wisdom, and sensitivity that make us think of someone more experienced in filmmaking. He makes no false steps, no effort is made to find the right tone and the right rhythm to tell us about the suffering of a teenage girl, not only in her aspiration to be a dancer but also in her struggle to find a way out of the painful impasse she is in leaving behind her male body to reach intrinsic and essential femininity with which she identifies and which she needs to see herself as complete and genuine. She immerses us, without concessions to hypocrisy or sentimentality, in a world rarely explored and almost always associated with depravity or delirium and turns it into a treasure trove of delicacy and tenderness that oozes authenticity.

Without a doubt, this story is an intimate, moving, and brutally empathetic approach to the state of the transgender issue, elevated by an intuitive and didactic directorial work, which never falls into sermons, and an honest and introspective lead performance, free of affectation. The film shows how much progress has been made for the integration of the transgender community and how much remains to be done, although the saddest thing of all is the certainty that, no matter how good the support of loved ones, people who are born with a sex that does not correspond to them make a journey as lonely as it is terrifying, but which is confronted with fortitude and courage worthy of admiration.

A film like Girl does not judge or recriminate this sexual distinction, but only seeks to bring us into the psyche of those who seek only to be understood.