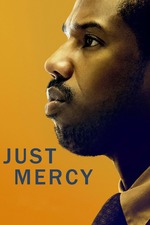 The latter of which rarely, rarely favours over the former in my books. It's not that I don't appreciate the effort of perfecting a form, it's that I often just react with apathy. So many films that fall under the formula of "intimate character study" or "based on a true story" try to escape their machinations - usssuually in form and sometimes structure - but never successfully do.

Just Mercy is one of those films that fits a formula with striking perfection. It's not re-inventing the wheel, but Cretton knows the story's strengths and appeals to the emotion. I found a few critiques slighted against it suggesting Michael B. Jordan's character was saintly, too perfect. But I think that misses the mark. What Cretton does is rightfully canonize his protagonists to illicit a spiritual undertaking.

It doesn't get weighted down by the intellect of its characters. It lives comfortably and consciously in the emotional stakes of them. Other critics were saying it's "heavy-handed"...YEAH, IT'S ABOUT SOMEONE WRONGFULLY CONVICTED ON DEATH ROW.

Cretton doesn't pretend the script is something it's not. There's a rhythm and construct to the narrative that feels effortless in his hands. Not once do you get distracted by some phoney inner-demon of Bryan Stevenson or the vulgar display of the Alabama racism. In a lesser director's hands, you'd have the scene where Bryan walks up to his law office and there's some racist graffiti all over it and he looks shocked and dismayed and then cut to him working harder.

NO, Cretton surpasses the expectation of giving weight to the antagonistic culture and instead focuses on the characters that deserve the audience's time. And he doesn't sloppily flesh out Bryan Stevenson with exposition (save for the first encounter between him and Walter) because it isn't about the character. It's about the environment which holds these characters.

In that, Just Mercy succeeds in layering in the hierarchal and interpersonal conflicts that deny justice in the first place. Instead of wasting our time with bad expository dialogue, he works with his actors to bring that out in compelling performances. Jordan and Foxx and Tim Blake Nelson all bring with them something beyond the words on the page.

And that's what this story is about. Everything that's not the words on the page. Because that's bullshit half the time anyway, whether it's a false testimony or a poorly written first act. Mercy is a humanist, delicate approach that respects its heroes and treats them with some dignity. In that, it unapologetically becomes a credence for hopefulness. Could that be confused with Oscar-baiting with a "wish-fulfillment" fantasy?

Perhaps. But amidst the few dozen films I've seen this past week or so that offer no hope in this post-modernist climate, I'm convinced true gestures of a heroic ending shouldn't be confined to the mythological or big-budget franchises. It's refreshing to see it done right with real material in a great director's hands on a mid-level budget.

Why do the big studio tentpole films have to have all the feel-good films?

Un-aestheticized hope without resorting to revisionist history (see: Django) maybe a good correction on the cynical path towards "I told you there was no point" dramas that the arthouse circles seem to derive pleasure from mercilessly.

If the anti-hero, cynical ending was the radical awakening for the 1940s-1970s cinema that ushered in Reagan neoliberalism, hopeful and earnest endings surrounding real heroes (not caped ones) are the new radicals of the "hopeless" millennials.