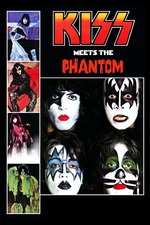 KISS Meets the Phantom of the Park

This movie has been unfairly maligned for so long by those who either clearly never understood the band KISS, or by those whose only reason for watching it in the first place was because they heard it was terrible and they wanted to chime in on the bashing, or both. This movie is pure fun and 100% KISS. This wasn’t just some vehicle for them, this was KISS, heart and soul, and was simply an extension of the mystical superheroes created in their 1977 Marvel comic appearances.

As a band, their whole purpose was to put the glam back in rock n roll and have a blast doing it. They clearly loved every second of making this movie, from the Three Stooges-esque banter to the ridiculous action scenes (some very poor stunt doubling is the only real knock on the flick).  It’s a movie. It’s fiction. The band KISS just wanted to bring another level of theatricality to their fans and it’s a very enjoyable hour and a half.   If KISS members later regretted making this movie or considered it a mistake, it clearly doesn’t appear on the screen.