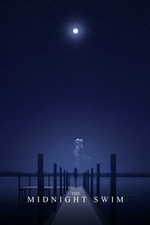 I'm still not sure about the ending. Or maybe it's too hard for me to relate - not to June being the last one left (I am, too) but her ability to let go, as I seem to be having trouble with that.

I wasn't sure about the inclusion of the love interest either but now, I think his character helps to make the first half of the movie a sort of return to a childhood summer, friends around the neighborhood left to their own devices, making the latter half of the movie even more unsettling.

Though oddly, when his character is respectfully phased out so the focus can return to the relationship between the sisters, I thought about how hard my boyfriend's family tries to include and love me even though I rarely speak and must often look like I'm seconds from running from the room. How, in the end, their efforts simply don't matter. My lost family is the one I want and that's just how it is.

My own mother was still alive the first time I watched this on Shudder. I had forgotten and had a lot of trouble with many of the scenes which so brilliantly convey the (very different) greiving processes the sisters are going through.

I relate to the thing with the house. If my brother were still alive, maybe we could return to our childhood home and recreate the spell - those few months when we were both home and realized though we were so far apart in age and experience, we were very alike and understood each other in a way no one else ever has. But with him gone, there are times I don't care if they just knock it down since I'll never have any of that again. What's left are only objects.

But while we're on the subject, I loved the lake house used. Everything worked and was almost hyper-organic in a way which creates a very unique, surreal atmosphere. But the thing I admire the most about this film is understanding, without ever really being told, where the very different women are coming from. Little details about their lives are conveyed with incredible subtlety.