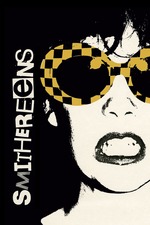 I'm just going to reiterate what people around Letterboxd users have said regarding this film: "a bleak film that centers around unlikable, yet real characters." Apart from Martin Scorsese's Taxi Driver, this film really captures parts of New York that I have never truly seen due ample amounts of romanticization depicted in most movies. I find this film very drastically depressing, but seeing how the main character Wren progresses through out the movie, she definitely had it coming. I have to admit, I don't know much about the Punk scene in New York either, but taking a glimpse of how it is during that time left a grime and nasty impression on me. Although, the bluntness is remarkable. I can't deny that the 16 mm shots of New York streets had deliberately emphasized the bleakness and grey areas of life, creating a hostile experience for me as a viewer. I consider this film as a partial reference on how narcissistic behavior goes and how intermittent the effects of self-destructive traits are. Overall, I may not have enjoyed the film as I thought I would given to the cultural differences and less exposure I have generally. But this hits me a big hindsight about the reality of pursuing something big, yet unattainable and how dreams can surely be left in smithereens without further notice.