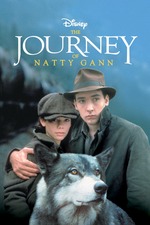 The Journey of Natty Gann

A forgotten Disney gem of the 80s, The Journey of Natty Gann, like many other releases they put out in that time, is a film that they would likely never make it is was made today, as being set in the Great Depression, we get to see kids smoking, kids abused in a crappy detention facility, kids cursing, dogs killing each other for sport, oh and get this one, there's a near run-in with a pedophile in this movie.

The same company who's proud of their "family" image that they fired James Gunn over a dated pedophile joke that he's long past from, yet in Disney's past, we have a movie where a kid is nearly assaulted by one. Wow, Disney's a freaking hypocrite!

All nonsense aside, I really dug the whole vibe of this film. While it doesn't really break any new ground from the other "characters going on perilous journeys" movies that Disney was a fan of at that time (it's essentially a darker version of Homeward Bound while still retaining [SPOILERS] the happy ending), there's still a lot to admire in Natty Gann's journey. I liked the character, her resourcefulness, and her journey to find her father (that and the child actress, who's now married to Patton Oswalt, really carries the film to where she's instantly likeable). I enjoyed the period 30s aesthetic showing the harshness the Depression was for almost everyone. I dug the late James Horner's underrated score. And then there's the wolf, who's as committed of an actor as that dog from The Artist that he ends of stealing the entire scenery from everyone else. Seriously, if I was living in 1985, I'd give that wolf an Honorary Oscar!

Again, if you're not a fan of Dark 80s Disney and are too sensitive to handle more mature themes, you'll despise this as much as some of the others in that era. As for issues I had with the film, it's definitely predictable in its outcome and I couldn't buy into Natty's "innocent" relationship with John Cusack, but if you're like me, and enjoy Disney when they take certain risks representing the real world, then The Journey of Natty Gann is certainly worth your time.

Although finding a copy of this film in its original aspect ratio is hard since apparently, the only home video release of this film (a 2002 DVD release) IS IN PAN AND SCAN! You can only buy the widescreen version on Bluray if you're a member of the Disney Movie Club. Well, I guess I'll have to join if I want to actually buy this movie, because it's sweet and a nice hidden gem in their library. It shouldn't be ignored.

Rolling Stone song of the day, #384...
"Another Brick in the Wall (Part 2)" by Pink Floyd (1979). I freaking love this song (actually the entire Wall album (plus that trippy movie) is fantastic and worth checking out), with its infectious disco-heavy production, a simple hook, and still a relevant message of the faulty education system and whether kids actually benefit from the school system or not. Although any children reading this, if you want to keep your thought control and dark sarcasm, don't act like Nazis and burn your school down to make a point! Yeah, that won't get you anywhere!

I Love Lucy: The Movie