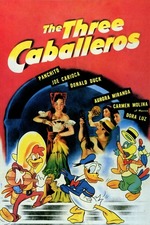 Man, I feel bad rating a Walt Disney feature so low, but every time I've rewatched The Three Cabelleros in my adult phase, it's just a tedious chore to sit through.

I love the culture it brings to the table (much like Saludos Amigos did), I love the fluid animation and the groundbreaking technology it did feature (blending animation and live-action seamlessly, something used to greater effect in Mary Poppins and Roger Rabbit), there's fun sequences with the Caballeros themselves, such as the title track (honestly I wish the Cabelleros are given another movie in the future because they are a blast to watch), and individually, I think the package segments are OK.

For the movie itself, structurally, the movie is messier than Saludos ever was, from the awkward framing device in connecting these shorts (Donald's birthday???) to the fact that some of these segments literally have nothing to do with the themes of the film. Never understood why Pablo the penguin was featured in this movie, and "The Flying Gauchito" would have been thematically better suited in the anthology nature of Saludos than a movie about The Three Caballeros.

I honestly think the package structure really hurt what could have been a fun adventure with three fun-loving buddies with culture blended into the story, but it's wasted with needless psychedelic filler, an over-emphasis on party segments and women lusts which gets really old fast, and despite being 70 minute, this film drags on and on like its 70 hours!

Why the film isn't lower in my ratings is that, again, the animation and technologies on display are impressive (especially the live actor's chemistry with the cartoon characters), I enjoyed the music, and it does have its fun moments in places, but The Three Caballeros is, in my opinion, sadly the weakest animation film released during Walt Disney's lifetime.

Probably will get some flack for that since technically The Sword in the Stone has the worst animation in terms of visuals, but the execution of Three Caballeros falls flat, making it an inferior film despite the better technologies.

YouTube Updates:
Got a bunch of plus today, since I've been inactive on Letterboxd for a couple days, that, plus I've been binging on Stranger Things 2 like crazy!

-The Three Caballeros video has been edited, and will be uploaded shortly. I'll leave the link in my next entry. As for now, you can check out this other videos, and there's still room for potential requests in the next live-action Celebrating Disney reviews. The next animated review in this series is Make Mine Music.

-Link to my June 2019 Haul video...www.youtube.com/watch?v=URkneTmyUJs

-My thoughts on Star Trek: The Original Series Season 1, with a Top 5 ranking of that season... www.youtube.com/watch?v=ZzCoH0IwilY

-Have also recently posted a double trailer reaction of two new trailers, featuring my reactions on the Charlie's Angels reboot and Jumanji: The Next Level...www.youtube.com/watch?v=KiZCFc3HGzI