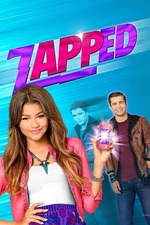 Zendaya, thank God you're moving past the monstrosity of Disney Channel, because Zapped was a pain to sit through.

I thought this would be a solid flic because Zendaya has proven to be a charismatic young actress (Spider-Man: Homecoming, The Greatest Showman), but here, not even she can save this wretched flick.

Aside from this dance sequence that showcases her talents, I mostly blame the uninspired, confused writing and bland directing on this one. I think if better talents took the ludicrous premise of an app controlling boys and embracing its social commentary on gender roles without force-feeding the politics, it'd be a fun flick. But in DCOM land, the premise doesn't work. Whatever social commentary they try to get out of this comes off as forced and stilted, and because of the target audience they were aiming for, unfortunately, the humor and characters are just stock, generic characters with little reason to care for them. I've seen plenty of DCOM movies and I'm getting plain sick of that "evil popular girl" trope that wants to sabotage everything so she wont lose her popularity, and don't get me started with Trip, a high school kid who's goal is simply to fart on people.

C'mon, Disney, these are high schoolers, not kindergarteners!

Zapped is another movie that could have been something, but is just Disney using the same old DCOM tropes to cater to a target audience that just isn't me. It's not funny, it's not clever enough in its commentary to be brilliant, and it just comes off as an awkward experience made by people who don't know how the human mind works (and when I mean human, I mean both men and women).

Next time, just give the script to Paul Feig and he'd make a good commentary on this material.