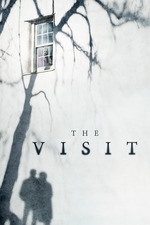 While The Visit was heralded by some as a return to form from M. Night Shyamalan, it's actually more like a devolution for him as a film-maker. The found footage format is a very poor fit, allowing for few of the formal pleasures that even his worst films apparently offer (disclaimer: I haven't seen any of his work after The Village). At the sake time, at several points here when the conceit becomes mildly inconvenient it is discarded altogether: there are establishing shots and title cards; scenes impossibly shot from multiple angles; fixed cameras that intelligently focus pull between characters by themselves. What's the point of setting limitations only to arbitrarily ignore them?

Found footage films work best when constructed from the ground up, with the story and set-pieces crafted in conjunction with the aesthetic. Here, the device feels like an afterthought to justify the low budget, and almost every horror beat in the film, the climax excepted, would have been more effective without it.

The two main children characters speak in overly cute movie dialogue - the younger one is a wannabe rapper, the older a wannabe documentarian and film snob - such that seeing them die horrifically would have been a happy ending. The horror itself is predicated around fear and distrust of old people which, if treated with slightly more self-awareness, could have become a more interesting, introspective, and challenging theme about our own fears of aging and death; as it is, the primary message is that old bodies and minds are gross.