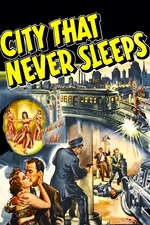 Director John H. Auer and screenwriter Steve Fisher, who also collaborated on the Hawaii-lensed HELL’S HALF ACRE for Republic PIctures, made this Chicago-set crime meller a year earlier. Narrated by the Second City itself (!), CITY THAT NEVER SLEEPS follows beat cop Gig Young (TEACHER’S PIT) over a single night in which he grapples with multiple life-changing decisions. Should he ditch his wife (Paula Raymond) and run off to sunny California with stripper mistress Mala Powers (THE UNKNOWN TERROR)? Should he go on the payroll of crooked attorney Edward Arnold (MEET NERO WOLFE) and help eliminate sleazebag magician (!) and blackmailer William Talman (THE HITCH-HIKER)?

Though Fisher’s screenplay checks off plenty of crime movie tropes, it also has some weird stuff, such as Chill Wills (THE ALAMO) as Young’s mysterious new partner who calls himself simply “Joe” and Wally Cassell (WHITE HEAT) as a department-store-window “mechanical man” who leaves a murderer wondering whether he’s an actual robot or a witness to his crime. At the same time, Auer doesn’t allow the dreamy metaphors to stand in the way of a solid crime thriller.

Young is pretty good, playing a morally compromised cop with enough ethics left to balk at performing Arnold’s errands while still wearing his badge. Auer effectively juggles the various characters and subplots, while the copious night shooting during a frigid Chicago winter provides the atmosphere (locations include the Marquette Building and the old Silver Frolics on Wabash). Back alleys and an elevated train track are the setting for the cool chase that ends the picture. Making his film debut: NEWHART handyman Tom Poston as a hoagy-chomping detective.