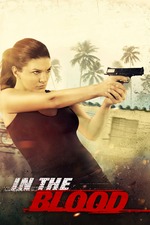 Gina Carano, a Women’s MMA fighter who made a successful action film debut in HAYWIRE, returns to the big screen in this vehicle directed by John Stockwell (BLUE CRUSH). The screenplay by James Robert Johnston (JOY RIDE 2) and Bennett Yellin (DUMB AND DUMBER) is a gender-switched variation on the tried-and-true premise of a desperate search in a foreign country for a missing spouse. Here, it’s the husband (Cam Gigandet) who vanishes during his Caribbean honeymoon and the wife (Carano) who tears hell out of half the island trying to find him.

A competent star vehicle for Carano, who handles the straight acting chores capably enough and the physical acting much, much better, IN THE BLOOD chugs along nicely, framing the shootouts and stunts within its gorgeous Puerto Rico locations. There is a great advantage in casting a star who can perform a variety of fight scenes and other light stunts without needing a double, and certainly Carano is as talented in that department as any male action star. It’s a shame Stockwell has so little confidence in Carano that he frequently tries to jazz up the action with jittery camera movement and confusing cutting that obscures her natural talent.

Adding depth to the story and picking up Carano performance-wise are over-qualified supporting actors, including Treat Williams (THE PHANTOM) as Gigandet’s rich asshole father, Stephen Lang (AVATAR) as Carano’s psycho crook father, Amaury Nolasco (PRISON BREAK) and Danny Trejo (GRINDHOUSE) as bad guys, and Luis Guzman (THE LIMEY) as the corrupt (like you didn’t see that coming) police chief. Plotting is the weak link here, though Stockwell and Carano pretty well succeed in distracting the audience from story holes and implausibilities. The CGI squibs and muzzle flashes are horrendous.