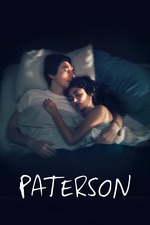 Writers write because, deep down, they have to. It’s a dual possession of sorts, a love affair with ideas matched by the struggle over how to express them. The central character of Jim Jarmusch’s Paterson, a bus driver named Paterson (Adam Driver) who lives and works in the city of Paterson, New Jersey, spends much of his free time jotting down poems in a “secret notebook.” During this process, words appear as text on the screen, spoken aloud before being revised and revised. Once completed, they are closed off from the world in which they were born; Paterson doesn’t even share them with his artist girlfriend, Laura (Golshifteh Farahani).

The double-sided nature of creative expression and everyday experience—what we make public and what we keep private—is a profoundly important motif in Jarmusch’s film. Initially, the element of routine acts as a structuring device—every day of the week begins with an overhead shot of Paterson waking up, eating his cereal and heading off to work. His mundane job, dictated by a specific schedule with routes and stops, is only made unique by the passenger’s half-heard conversations. Daily interactions with a downtrodden co-worker (Rizwan Manji) and nightly visits to a local bar owned by Doc (Barry Shabaka Henley) feel repetitive in nature.

Yet these seemingly small moments contain a certain magic all their own, internal rhymes and themes that begin to dismantle the idea of normalcy. Like Paterson, we are given the opportunity to observe details with a keen eye, noticing and remembering them for reference at a later time. Lines of dialogue will appear in one scene and then again in another. Shots will repeat but from a slightly different angle. It’s as if the film itself is traveling around one of the many circular patterns Laura has painted on their bathroom curtains.

While Paterson would never admit it, his everyday journeys are infused with possibility and mystery of place. He attempts to transcribe these feelings through a simple observational style not unlike the poetry of his hero, William Carlos Williams, another son of Paterson and a crucial influence on Jarmusch’s own style. Accordingly, much of the film quietly breezes through vignettes that highlight the nuances and history of an environment. What’s not immediately apparent is the hint of menace hiding underneath the surface.

This brings us to Marvin, Laura’s adorable (and subversive) English bulldog that practices his own kind of destructive poetry at Paterson’s expense. During one fascinating moment, man and beast glance at each other in silence, sharing an unspoken rage that will never fully come to fruition. Marvin’s presence inspires Paterson in negative ways, but the character has mastered the art of suppressing those feelings. That kind of art does no one any good.

So often in Paterson characters are torn between competing impulses, usually resulting in private affairs being pushed into the public domain. After discovering Doc has borrowed her money to play in a chess tournament, his wife berates him in front of customers. A young couple breaks up more than once in plain view of everyone at the bar, playing out their own version of Romeo and Juliet in reverse. While walking Marvin one night, Paterson listens to a character played by Method Man freestyling while washing clothes at a Laundromat. That they are not meant to see or hear each other makes this moment all the more intimate.

Herein lies the brilliance of Paterson as an elevated exploration of duality. Life can be one thing, or it can be another, malleable and volatile like crashing waterfalls, or simply sublime like water falling on hair. To paraphrase some of Paterson’s own poems, your legs can be running out the door while your top half sits writing upstairs, each stubbornly ready for the next verse.