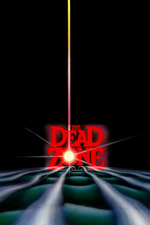 I’m glad y’all consider The Dead Zone to be one of Cronenberg’s best, but honestly... that’s just not how i felt watching it.

The biggest flaws that hold the film back for me are the editing and pacing. Because of how frantically this film is edited and paced, it makes for a film whose story and themes do not leave that much of an impact on the viewer. This also results in a story that lacks any sort of suspense of urgency since it constantly trying to get itself over with as quickly as possible throughout the runtime. This also might have something to do with Cronenberg’s directing for this film, which also felt very all-over-the-place at multiple intervals. He takes the source material and makes it feel so painfully barebones in its execution, which make the film come off as a mediocre, everyday psychological thriller with no thrills, investment, or enjoyment to it whatsoever.

The film’s acting (aside from Christopher Walken) and writing also disappointed me. Every actor that isn’t Walken feels like they are half asleep when it comes to their line deliveries, which makes for an uninteresting cast of characters that come off as bland and forgettable. The material that they’re given does not do them any favors either as the characterizations are nonexistent to a point where the “characters” feel more like pawns that are used to move the plot forward and not much else. Along with this, the dialogue ranges from painfully below average to downright corny to listen to at times, which makes the film’s supposedly dark tone make it feel more cheesy than it should to be.

All-in-all, despite it being alright from a technical perspective (which i forgot to mention since it doesn’t even stand out too much in that regard), The Dead Zone is a disappointment that felt like it should’ve been in the hands of a director like John Carpenter in order to make the concept reach its full potential in terms of execution. Despite Cronenberg’s efforts, they are not enough to compensate for what seems to be a customary, stale conglomerate compiled with mediocrity and drivel at the end of the day. Let’s hope that the next Cronenberg film (as well as the rest of his filmography) i plan on watching doesn’t disappoint me.