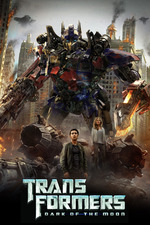 Transformers: Dark of the Moon

I’m pretty sure that sometime during pre-production on this, someone sent Michael Bay a wing-suiting clip. And a picture of a gull-wing Mercedes. And a skinny blonde. And some conspiracy tapes. The whole thing feels tacked together from start to finish, which should, I know, come as no surprise at all.

I detested the slapstick, comedy robots from the first film, and avoided the second, but the vintage moon-landing footage in the teaser announcement for this suckered me back.

It might be the best of the three. There’s plenty of exquisitely executed set pieces, and McDreamy makes for an enjoyable foe, but it’s still all pretty terrible and forgettable and what the hell was Malkovich doing?