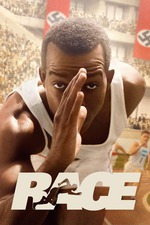 In Stephen Hopkins' historical biopic "Race," Stephan James plays Jesse Owens, an African-American runner who broke hundreds of records and won four gold medals at the Berlin Olympics in 1936. The film begins on Jesse's first day at Ohio State University, where he is one of the only African-American students, admitted on a track-and-field scholarship. At Ohio State, he begins his training under the watch of Larry Synder (Jason Sudeikis), a tough-as-nails coach who was nearly an Olympian himself. Under the tutelage of Synder, Owens breaks record after record and eventually lands himself a spot in 1936 Berlin Olympics, where he must succeed in order to stand up against the oppression and brutality of the burgeoning Nazi regime.

Biopics like "Race" are hard to pull, because the story is history--we all know what happened. We all know that Jesse Owens won the four gold medals in Berlin, so it's not the director's job to build tension so much as it is to create an interesting character study and compelling human drama. Though Hopkins is somewhat successful in regard, "Race" ultimately plays it so safe and formulaic that the end result is a biopic that, while not necessarily bad, is paint-by-numbers and forgettable.

Stephan James does a fine job as Jesse Owens, though I feel like he could have gone much deeper if given the chance. Unfortunately, the script paints Jesse as a fairly one-note character--he's likable as the ever-humble everyman who always turns the other cheek in the face of hatred and discrimination, but you never get the sense that he's a real person with flaws and shortcomings--in the entire course of the film he only looses one race, and the more unsavory aspects of his life--such as a short-lived yet passionate affair--are glossed over and immediately forgiven, as if the director just shrugged and said "What are you gonna do?"

The most memorable character of the film is Jason Sudiekis as coach Larry Snyder. Though as a character, Snyder sometimes dangerously borders on the cliche "gruff but inspirational coach with personal demons," Sudiekis' warm, sometimes subtle performance saves it from falling completely into the trope.

Though "Race" is too good-hearted and spirited to be called a bad movie, its cliche-ridden narrative and perfunctory, surface level examination of American racial tension keep it from being a truly memorable film. Though it has a bright and shiny surface, more often than not, the substance just fails to appear. Still worth a shot, though, especially if feel-good sports movies are your thing.