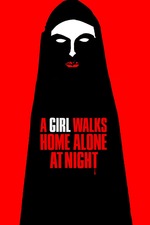 Unfortunately the description above is both a blessing and a curse. The film follows a female vampire transgressing the streets of fictional Bad City. Through the course of the film she delves in some romance and questions her own morality all while sporadically sucking on the damn tasty blood needed for survival. Every now and then as a viewer you'll come across a film in which the story is much stronger on paper than in its actual execution. Unfortunately for the viewer, such is very much the case here.

In many ways the film's look and style is damn near perfect for bringing out the corresponding tones innate to the vampire genre. Draped in a black and white color scheme, it is a film that finds life in the shadows. The look and style are crucial in bringing out the overall somberness in this film. With the look and style being such a positive, one can only hold a little story is added to complement the proceedings. I found the film to be lacking in this respect.

The look of the film jades you for at least the half hour of the viewing. Some damn cool camera work assures that the viewer will remain invested up to that point. Eventually I found myself wanting more than just some cool camera shots and style. There are some inspired moments that touch upon the decrease in morality in Bad City (the vampire herself is among the more moral figures in the film), but these moments tend to be too scattered to make much of an impact.

One of those viewings where you'll likely never be bored, but one in which you also won't remember a damn thing in a year's time outside of the fact that it looked nice.