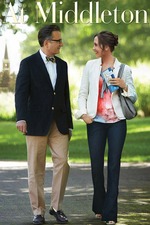 At times as a viewer you'll come across a film that surprises you in the way it goes about its business. Of course, one would hope that surprise is ultimately a good one. Fortunately for the viewer, such is very much the case here.

The story follows parents George and Edith as they take their kids on a tour at a university. The meat of the film consists of George and Edith getting to know each other over the course of this day. Going into this viewing, I thought this would be your standard rom-com, and as such I approached this viewing with a Cabernet in hand. Instead, this is a film that is dependent on two characters, and thankfully the acting is more than up to the task in that regard.

Vera Farminga and Andy Garcia are both strong here. Not only in the chemistry they share together, but in the talent displayed in bringing out their characters. These feel like real people going through real problems. As such, it is easy to invest in their plight.

One thing to respect about this one is the fact that it doesn't offer an easy out or solution. Rather, it shows two unsatisfied people find the spark of life throughout the course of the day, and we are left to ponder the ramifications that may ultimately follow. Not an overly deep film per se, but in the end life is about as meaningful as what we put into it. The same could be said for this film.

A Most Violent Year