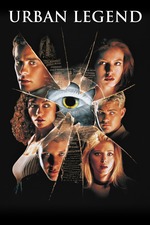 To be honest, these past couple weeks have been hard. The election, senior year midterms, figuring out if I'm applying for grad school, figuring out how I'm gonna get the money, and sorting my life out. I'm mentioning this since I always saw myself as a screenwriter. I'm not particularly the best writer or anything, but that's what makes films so enticing. Lately I've been kinda chilling with films that hit under the bar but serve some nostalgia for me if you've noticed my recent viewings (The Craft's sequel, DCU series continuation, Witches remake, Scooby Doo remake, and now a Scream rip-off that I've seen and even written a remake of when I was 12).

The opening is honestly hysterical. It feels like it's doing Scream justice. The awkward radio host convo between Sasha and the pregnancy pill girl and the woman in the car singing the wrong lyrics to Eclipse of the Heart. It's honestly hilarious to watch. There's a dumb, 90's charm to it. And I gotta admit it helped lift my spirits, in a way Scoob! did, but I was hurt by the lack of mystery. Something I never noticed in the opening is that the girl locks the car door, effectively trapping the killer inside the car. She dooms herself from the start.

It does end up playing out like a Shakespearian tale while ripping scene for scene from Scream. Yet hilariously, for some dumb reason, it works for this in a cheap knock-off way and makes me appreciate Scream WAY more. Could just be cause I'm in a Shakespeare class but Scream's storyline with Sid/Billy and Natalie/Damon reminds me of Angelo/Isabella in Measure for Measure. Sexual predatory attitude, female using her voice to speak up against herself or by whatever means. necessary.

I mean on, Tosh (Danielle Harris) is like the anti-Casey Becker. It's so weird this film has ANY right to even SEMI work at all is insane. What sucks me out, truly, every damn second, is the lead. Alicia Witt even auditioned for Scream and was one of the few top choices. Which... I don't know Alicia, if you didn't know how to deliver the lines, why you came off like an awkward businesswoman in the middle of the campus, but something was fishy, and I think it was your performance could even Tara Reid handled her material strongly. Which sucks cause, Natalie could be awesome.

"One black eye or two, Damon?" delivered by any decent actress, hell they could've rehired Neve Campbell (you saw what she did to some parts of the script in Scream and give it the performance it DESERVES to help pay off the wonderful quirks of Williamson's script?), yeah, Natalie should've had that. It's there with how Loretta Devine, Rebecca Gayheart, Tara Reid, Joshua Jackson, AND Jared Leto can CARRY the script into film, and make it work. You can see in the subtitles Natalie would've been likable with a better actress. That's just hands down.

Which is so weird because the script IS smart at times with how it handles Urban Legends. The woman ends up punching this perv-y asshole instead of making out with him thereby subverting the trope of the actual Urban Legends. It's little tweaks like that that could've been BUILT upon. Had they killed off Damon during the pop rocks scene it would've changed the tone of the film, Urban Legends would be taken seriously, then every moment after could've held more weight... Even if you keep Damon alive and don't reveal the killer to throw the audience a bit. Also even killing Natalie during Tosh's prep for the hook-up scene somehow then making Danielle Harris the lead would've helped. AT LEAST SOME KIND OF SUBVERSION. But these are dumb ideas I'm making up that would've improved the script in my eyes.

For a script copying Scream the whole way through, you'd think Silvio Horta (screenwriter) and Jamie Blanks (director) would've remembered to carry the suspense the WHOLE way through, if they were so ambient of doing their own version of Wes Craven's and Kevin Williamson's film.

Also why is this film so reliant on every death being a suicide or a prank? It comes off awkwardly comedic and irrational. They should've held more realistic grip. Is the film that scared of the fact the college campus would close down? Look at campuses during covid, they're sending their students to classes. Like now, it's just not that hard to believe.

Jared Leto saves the middle half of the film. "I dropped journalism ethnics, it wasn't helping my GPA". Same, actually same. I had to switch to English. Real boring stuff.

Or the teacher/principal/campus security could've been in cahoots to prevent the murders spreading like Urban Legends...ugh, I'm so mad. Also can Natalie really blame Michelle when she's as much to blame in the awkward flashback... Asshole.

Reese is such an ass the entire time too, it makes her entire arc (the moment when she decides to take charge ('when something really happened' like she could've suspected the whole time) feel unearned.

Even Tara Reid as Sasha, oh my God, does it not feel like a homage to The Fog? Even that slight homage as a full script would've strangely been better. Getting calls about Urban Legends all evening for a true crime host would've been creepy.

Also like..... Sasha's entire death scene. It's so dumb. Who buys that as performance art. Two people listening. Natalie only calling the station for a busy-tone then running there. Plus since this copied Scream, they didn't save the dumb big-breasted girl who can't act, etc. during a scene where she goes back upstairs. Like, come on. We have to sit through this trope during a Scream ripoff that mocks the same scene this ripoff copies???

Also the Paul and Natalie moment isn't earned. Sigh. Also the foreshadowing with Brenda in the backseat is awesome.

The finale carried by Rebecca Gayheart is pretty awesome, even though the film randomly serves Scream 2.

The final scene is so perfect, though..