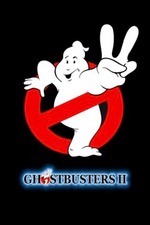 Perhaps it's the fact that I saw this one first, as a wide-eyed kid, but I don't understand the standard "let down" label that Ghostbusters II normally filed under. Of course it's not as fresh as the first, a little more slick but perhaps more stiff, but for the most part it's a really fun film that is meritous on its own terms.
That it even feels a little less fresh is actually thematically consistent, early on it's established that the Ghostbusters are seen as has-beens, and despite saving New York and the world, were sued into oblivion.
The guys were legally barred from their paranormal exterminations, taking less than satisfying work (Children's party entertainers, hosting mediocre television, etc). They're no longer the young PhDs (plus working class guy) with little to lose, they've had their time in the sun, and the world's moved on (apparently to He-Man). At one point, Murray's Venkman advises the group to "suck in their guts" in a vain attempt to minimise how visibly they've aged.
I think we even get to see hints of the new Bill Murray that would later kick off in Ramis's Groundhog Day and eventually make him an indie rockstar. His relationship with Dana (Sigourney Weaver) broke down quite fast in the intervening five years (enough time for her to be married, have a baby, and divorce); it's made clear that his wise-guy, "game-show host" schtick hasn't quite worked out for him.

Of course here, it's a much slighter plot thread, even as he spends much of his time away from the other Ghostbusters, who do the dirty work of investigating what's haunting Dana and her son (starting with Peter MaCnicol's lovelorn, "foreign" creep), while he's tasked himself with the important goal of winning her back.
There's signs that many of the scenes have been chopped up to cleave away the scripted fat, and make way for improv-ed lines, which leaves some of the scenes a little murky in terms of motivation.
I feel as though some of the "miss" gags just lacked context that didn't make the cut, and some of the lines might have sounded better than scripted dialogue, but ring untrue when we haven't seen all the alternative takes.
Indeed, the script, while having a decent "heart" storyline (in my estimation), may have lacked 'spark' and probably was improved by all the cast and crew through the production. This wouldn't be a great crime, as something similar happened the first time around, only in that case it was propelled by a synergistic zeitgeist-catching force, this time the material is just elevated to a professionally adequate level.

The best example probably lies with Rick Moranis. His character Louis has changed from overconfident and loquacious (qualities transferred to MaCnicol's character) to a stock-standard anxious and shy nerd; despite this, Moranis manages to make the most of his part, particularly in the courtroom scenes as he manages display face-slapping incompetence without resorting to the easiest of clichéd jokes. Referring to the jury as "the audience" and regaling them with a rambling tale that manages to say less than nothing never fails to make me laugh.
Kurt Fuller's smarmy aide to the mayor lacks the defining adversarial quality of William Atherton's "dickless" EPA investigator, any memorability is down to Fuller himself, who at least seems game.

Such as it is, the special effects are slicker, perhaps feel a bit too rote for some; the original's effects were top notch at the time, but still a little rougher hewn, and perhaps more spontaneous in feeling. Now there's an established visual grammar, the "logic" of which perhaps places less emphasis on a goofier, "funnier" appearance. The ghosts and monsters still follow anarchic loony tunes rules, which is a relief I think and for me they're consistently surprising.
Another thing apparently lacking in the script is the poetry of Dan Ackroyd's idiosyncratic pseudo-science and invented mythological soliloquies: there's a few tidbits spoken by and about 'Vigo' (voice dubbed by Max Von Sydow, thankfully enough) and "psycho-magnetheric slime" but neither feel as lovingly crafted or really showcased as the description of "crossing the streams" or the keymaster's story of Gozer's past appearance as a giant Sloar.
Instead the emphasis seems to be purely on one liners, and Second City trained readings of the script. Ramis delivers a few of my favourites, expanding the character of Egon beyond the humourless robot of the first (including a hilariously sad glimpse into his childhood), as well as Venkman's awkward introduction to baby Oscar giving way to affectionately antagonistic teasing.

All in all, a worthy sequel that I think is certainly entertaining. Maybe it's because I want to spend as much time in that world as I can, but even if it doesn't have all the magic of the original, it has plenty left to enjoy.