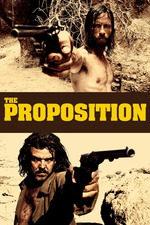 I just rewatched this nine years on and it has aged well, in fact it feels even better to me now. It in part feels like what a Blood Meridian film should be, but free from any constraints of having to be an adaptation, free to be it's own beast. Watching it again, I was also reminded of Jim Jarmusch's Dead Man, though less self aware.
There's a literary feel to Cave's writing; classic western tropes are exposed under the harsh Australian sun and thrashed about the sunburnt country, Hillcoat's direction is artful but not flashy -it could easily have been part of the Aussie New Wave films of the 70's-80's, standing beside Beresford, Weir, Schepisi, etc.
I was wary at the time it came out, that some of it's revisionist history may just have been hipster wish-fulfillment, and that the setting may have been diluted owing to international influences on the story, but as the god in Lamb evaporated, these concerns evaporated in me. Some of the characters are lacking in dimension too, but most are fully formed and ultimately it's just the story has no time for them.