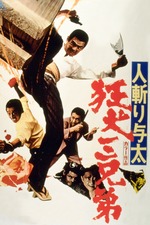 So, let’s talk Pig-Chicken Suicide for a moment.

Pig-Chicken Suicide is atrocious. It’s decrepit and crudely made, the film is near intolerable to watch. It’s cinema at its lowest point. This film is also near intolerable, but thankfully, at least there’s a competent director behind the camera: Kinji Fukasaku.

I respect Fukasaku as a filmmaker. His stylistic flair obviously points out his competency and cinematic vision. If it weren’t for Fukasaku’s skill as a director, I’d probably rate this a half-star.

And yet, I’m still going to rate this a half-star.

I have lost brain cells today, my friends. That’s not something I particularly want to happen. Outlaw Killers, content-wise, can be used as an example sentence to describe the antithesis of good cinema.

Thematically and narratively, it is vulgar and a load of bullshit. The characters are insufferable, rape is played for entertainment. Somehow, this film made me grow a moral compass.

And not to mention, it’s awfully boring. As with many other terrible films I struggled to finish. I watch a good portion of the film on 1.5x speed. If a film in order to be digested must be sped up to survive, it automatically deserves dissolution.

So yeah, not that good of a movie. Though I guess you kinda got the memo. That is all.