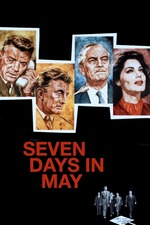 Seven Days in May

To preface this review, just look at the cast and crew behind Seven Days in May:

Need I say more to say that this is a heavily stacked film?

Frankenheimer’s direction is impeccable. Wide angle shots, exceptional blocking and composition, moody lighting — not to mention a keen eye for a terrific and thrilling concept.

His films — at least his films from the 60s, are always worth the watch. They’re exciting, and full of dynamic filmmaking that this generation of filmmakers should appreciate. That is all.