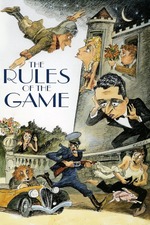 The Rules of the Game

Every time I finish watching The Rules of the Game, immediately I feel the sudden urge to go back to the start and watch it all over again. Its qualities are so distinctive yet so indescribable.

All the characters are amusing and engaging in the most pathetic way. The one non-hyperbolic character, Octave, plays a master of ceremonies to the farcical comedy of manners. The third act becomes such a farce that the serious yet bizarre conclusion is ever so effective.

To say this masterpiece has a plot would be lying; it just exists. Existing in an oblivious world of laughably delusional characters. It's not an outright comedy, but man is it hilarious. One of the all-time greats, worthy of all respect. That is all.