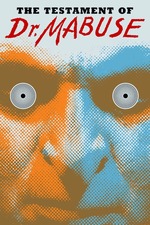 Films I watched while in Vermont - 8

Fritz Lang was in a league of his own -- visually, thematically, you name it. He was already a master in silent form, and the bridging years over to sound brought a whole new wave of creativity. Thus we are left with works like The Testament of Dr Mabuse. The story itself is ever so enticing, following the schemes of gangsters plotting national anarchy while the police try to foil their plans.

And the sound design and editing too are expertly crafted. As Lang also famously does in M, the sound design is very minimally, only invoked when necessary, leading each sound with the utmost power and significance. The editing I found super refreshing and organic, particularly the scene transitions. Each transition follows a stream of consciousness, relating internal ideas and conclusions rather than to simply follow the thoroughfare narrative.

Had been many years since I'd seen it last. It's a film I think overshadowed by its more famous brother in M. Nevertheless, it's very much worth the watch. That is all.