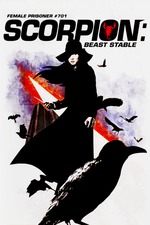 It'd be fair to assume from its already insane opening that this as a sequel this is going to be a heightened festival of violence reclaiming its pink origins, but the outcome quickly subverts it and the general approach to serialization, opting to show both an experienced and saddened character as well as that her concerns, even applied to outside prison, have only remained relevant.

While still stylistic and heightened, there's a slower and more specific woe to Beast Stable that expresses not quite tenderness but a concern in its resignation to the degree that each act of violence, even the one that starts the movie, reverberates throughout. And by eschewing an actual prison for most of the movie but still finding entrapment from emotional investment, desperation, and vengeance, it’s arguably the one that focuses on the theme of imprisonment the most by not tying it to a specific group of villains over her own decisions.