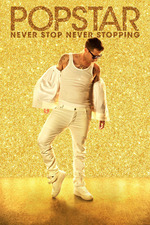 I slept on Popstar: Never Stop Never Stopping for four years. After finally getting my hands on a cheap copy, I understand the cult following this film has garnered. Popstar is par for the course for The Lonely Island, and if you are into their brand of comedy, this is a sure-fire hit.

Walk Hard: The Dewey Cox Story is far superior in every way, and comparing the two is essentially impossible. The dramatic shortcomings and lack of a recognizable climax in Popstar are only heightened by how fleshed out and well written Walk Hard is. Without Walk Hard, I love Popstar. With Walk Hard, I simply like it. Dewey Cox, though despicable, has likable traits. Conner 4 Real is not a likable character from start to finish.

The concert scenes keep the movie afloat. I would have preferred whole songs because that is The Lonely Islands bread and butter. Everything in between is relatively bland. Maya Rudolph is wasted. Sarah Silverman is wasted. Tim Meadows plays the same character as in Dewey Cox, but with less wit. Jorma Taccone plays second fiddle, and he deserves better.

The ideas are all here; they needed better execution. A few more drafts would have been beneficial, as well.

The Secret Life of Walter Mitty